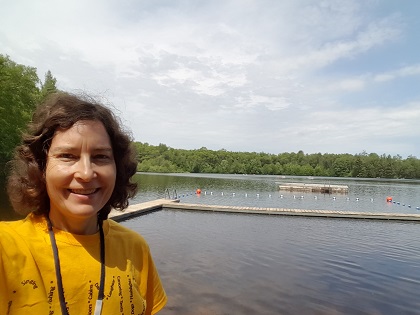 I took a break from work to spend four days volunteering on the waterfront at Camp Bird. I built sand castles, judged cannonball contests, canoed among the water lilies, and sang stupid songs at the top of my lungs. Throughout it all, I worked with and supported youth to enrich their camping experience.

On a scale of 1 to 10 on the memory-maker meter, Oconto County’s 4-H Summer Camp 2017 rates as an 11. Blame it on the weather. With my whole heart, I never want to see the inside of the camp’s storm shelter ever again. Two trips underground were enough, though I have to admit, the aftermath of the storm (downed trees and branches) was a sure sign we had been in the right place.

I’d think we left camp with confidence gained only by persevering through a tough situation. When we registered for camp we opened ourselves to new opportunities and adventure. But beyond that, we proved our resilience by weathering the unexpected challenges thrown at us by the storm.

The rainstorm knocked out the power on the second day of camp. That’s a really big deal when you have 90 people who need to take a shower! One little girl said she was certain her mom would put her in the bathtub for three days after camp was over. I’m not sure what felt sweeter when I got home: flipping on a light or taking a shower. I missed both of these during my days without electricity.
I bet the campers and counselors felt the same way.

We arrived home Tuesday afternoon with more than sunburn, mosquito bites, and sand in our suitcases. We had memories to last a lifetime. We learned new games, songs, crafts, and ways to entertain ourselves in storm shelters. I saw kids learn to dance the Macarena, row a boat and weave a bracelet. They gained independence by spending a few days away from the comforts of home and the security of mom and dad. I hope the wisdom they earned sticks with them.

Boy, do we have stories to tell!